The word "Moron": It's dark and bloody history.

I got involved in one of those pointless twitter debates yesterday. I was trying to point out to a fellow anti-fascist who uses twitter, that if he understood the history of the word 'moron', he wouldn't use it against the assorted fascist and thug organisations we both oppose.

It's difficult to call someone out on the language they use. They very rarely see any problem with their language. Their view is that the problem is obviously with the person who is pointing it out. They're being too sensitive, a bit prickly, pedantic and trying to police our language is exactly what fascists do, isn't it? And fascism is such dark, evil and dangerous force that any language or tactic used against it is justified, surely?

My point is that the same antifascists who use the word 'moron' so freely as an insult, would never use words relating to race or gender as insulting epithets, and that if they were to spend the time to investigate the history of this word, the concepts it supported and the consequences of these concepts for hundreds of thousands of people, they would understand why they should stop using this word in this way.

So where did the word 'moron' come from, and what does it mean?

Like many of these words, it was invented by a member of the medical profession: Henry H. Goddard, a psychologist and eugenicist. It was used freely in his seminal work 'The Kallikak Family' 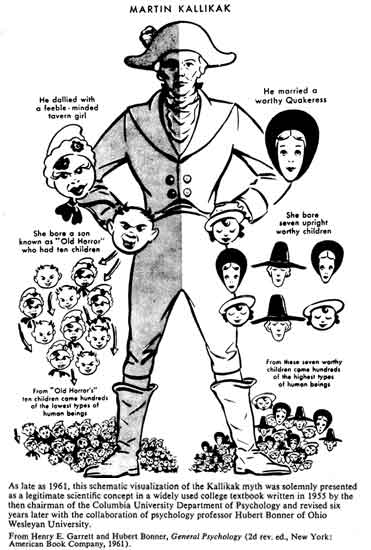 A moron in Goddard's definition was precisely defined (If you can call anything related to IQ measurements precise or useful) as someone whose IQ fell between 51 and 70, higher up the IQ scale than an 'imbecile' or an 'idiot'. As can be seen from the illustration, this "scientific" theory also got mixed up with moralising and class and race prejudices. This brutal classification of human beings was used to justify compulsory sterilisation in the USA.

Between 1907 and 1963 64000 sterilisations were carried out in the United States, with eugenic sterilisation programs being enacted in 27 American states. As well as people with intellectual impairments, many of these sterilisations were carried out against poor people and ethnic minorities. The sterilisation program in California was particularly inspiring to the Nazi party in Germany, and funding for eugenics research flowed from the USA, from wealthy foundations like the Rockefeller institute to German eugenicists such as Joseph Mengele. Eugenics was also popular in Britain; as much an ideology of the left as of the right.

People are not aware in general, that the first victims of the Nazi holocaust were the disabled. Nor are they aware that it was not jackbooted Nazi stormtroopers that carried out the killings of disabled people in the Aktion T4 programme, but ordinary doctors, nurses and medical staff. Some of these people were card carrying Nazis, others were apolitical people, convinced by the prevailing medical opinion of the time (held all round the world) that eugenics was an ethical, moral, economic and even 'kind' way of dealing with disabled people. The concepts enshrined in the word 'moron' and the classification and segregation of human beings by IQ, popularised by eugenicists in the USA and Britain, helped convince these ordinary people that what they were doing, the sterilisation and 'euthanasia' was OK, even "in the person's best interests", because someone who was so disabled could obviously have no "quality of life".

Nor is eugenics something confined to the distant past. Sterilisations of people with intellectual disabilities continued in North Carolina up to 1974. The state just a couple of weeks ago set aside a $10m compensation fund to attempt to assuage it's guilt to the 7600 men women and children whose reproductive rights were stolen by this brutal policy.

In this facebook thread members of The Learning Community for Person Centred Practices recount some of their experiences of what happened in North Carolina: Bill Allen said "It still gives me shivers! At one time, Sonoma Developmental Center (not far from my home) was a "leader" in the sterilization of people with developmental disabilities. Years after there were restrictions placed on this practice, I found myself at a People First Conference in San Francisco. It must have been 1982. I didn't have a schedule, so I just decided on a session and walked in. As it turned out, it was a panel discussion on sterilization. What made this particular panel different from any others was that everyone on it (men and women) had been sterilized at Sonoma Developmental Center. Even more surreal was that there was a pro and con side of panel participants. I have never forgotten that day. If there is a video or audio record of it, I can't seem to locate it. Whether they agreed with it or not, it obviously impacted the lives of these individuals forever more. When the discussion was over, everyone on the panel chatted with each other and just moved on. It may have affected me more than any other event in my life working with people with developmental disabilities. California needs to follow North Carolina and soon!"
Val Carmine said "A former director of Caswell Center (NC) told me that he would get calls and letters from people who had once lived at the Center as children. They were wanting to start a family and were asking if anything had been done to them at the facility. Unfortunately 100 per cent of those people had indeed been sterilized."

The word "moron" is still heard in the mouths of bullies and those perpetrating vile hate crimes against people with learning disabilities. It's a word that among other insults and demeaning language forms the background noise of many peoples daily lives.

In conclusion, the word "moron" was deliberately invented by eugenicists to prop up their theory of eugenics. The word "moron" was used to justify categorisation, segregation, discrimination, sterilisation, euthanisation and  attempted eradication of a whole segment of humanity. It is a word that people who know the history of eugenics and the consequences of this theory to countless thousands of disabled people know is dripping in blood. To object to people who should know better using it is not being 'over sensitive'. It is simply to ask that people with intellectual impairments be treated with the same respect as other victims  and survivors of eugenics theories and the Nazi holocaust.