This blog has recently had it's 10,000th visitor. That's not bad for a blog that I woefully neglect and update far too infrequently. I'm using this success to motivate me to write here more regularly.

I spent last week in Portland, for The Learning Community for Person Centered Practice's gathering in Portland Oregon. There's a good video that interviews some of the participants here:

I gave three presentations there. One was on the Justice for LB campaign, one was on writing really good One Page Profiles, and one was on the work of building community circles in the UK.

I chose these topics, because I felt they were the most important things happening in the world of person centred practices in the UK that the delegates at this conference in the US should hear about, for different reasons.

I felt it was vital for people to hear about Justice for LB, because it's a story that illustrates just how vital it is for services to listen properly to people and their families, and the potentially tragic consequences of failing to do this. 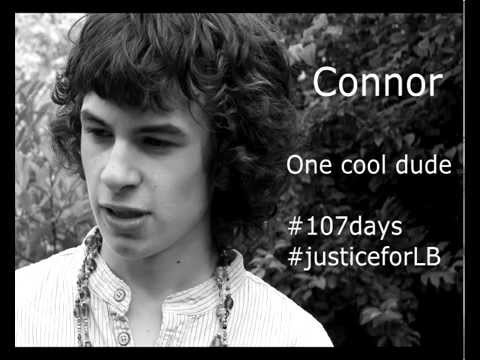 The family had tried to hold a person centred review for Connor Sparrowhawk (LB) at the Assessment and Treatment Unit. They wanted to share what was important to Connor (interesting activities, London Buses, Eddie Stobart lorries, artwork and much more) and what was important for Connor (the fact that his epilepsy was getting worse and the support he would need with this). The staff at the ATU had no time for this thinking however, because it was "not the Care Programme Approach" and did not take it seriously. Connor died a needless and avoidable death by drowning in the bath at the ATU, having presumably suffered an epileptic seizure while unsupervised in the bath. You can read more about the circumstances of his death in the Verita report published about it.

The people who came to this session were visibly moved by Connor's story. They told me that on occasions where this kind of thing happened in the US, the company involved would generally be put out of business, either by quality inspectors, or by the cost of the damages they would have to pay out.

The key issue was that the family had the answers all the time. They knew about the support Connor needed, and they knew that person centred approaches like the person centred review were the way to think together about, plan and deliver the support he needed. All that was needed was for the service to listen to Connor and his family.

I've written previously in this blog about the Winterbourne View Concordat, Justice for LB, and how person centred approaches could be part of helping people get out of Assessment and Treatment Units and into the community.

I talked about One Page Profiles because they are proving to be such a brilliant way of introducing person centred change into individual people's lives, and at scale across services. There was really warm applause for the 100 One Page Profiles blog, which was seen as a real asset for person centred practitioners, both as a source of stories, a repository of great examples of the best one page profiles, and as an illustration of the breadth of applications for this person centred thinking tool. Michael Smull told me personally that he considered Helen Sanderson's work on One Page Profiles to be just as brilliant as anything he himself had ever come up with, "and that's speaking as someone with an ego the size of mine". 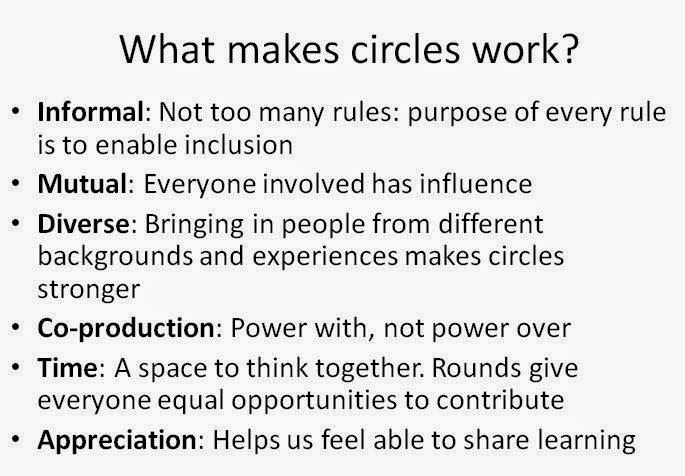 I spoke about Community Circles because this is an idea with immense potential for the future. We've looked at ways we can apply circles of support at scale, by making them simpler to facilitate and by offering really good support to facilitators. We've also looked at really good applications for circles: in care homes for the elderly, at the end of life with hospices, and their use by faith communities with people who have become isolated because of disability, ill health or circumstances.

The board of the TLCPCP later agreed that the principles that make circles work, shared in my presentation could potentially also be used as principles with which the Learning Community itself could reframe itself as a growing international community of practice; we could become a global circle sharing our learning together. This is really exciting news, and something I'll be thinking and talking about a lot more in the months to come!

A really big highlight of the Gathering for me was meeting Angela Amado, a leading figure in the field of creating inclusive connected communities, for example I really admire this manual on connecting people with disabilities with their local communities. It was great to tell her about some of what Connect4Life has been doing in central Lancashire.

Overall the gathering was a great opportunity to meet a room packed full of real leaders, ideas people and creative change makers: people full of energy and experience, with a determination to change the system, who have certainly boosted me and made me feel optimistic about the prospects for helping many more people gain choice and control in their lives.
Posted by Unknown at 16:32 No comments:

What are the conditions in which people share their learning?

In person centred approaches, we rely on lots of different people sharing their learning, including people who previously may never previously have been asked about what they have learned. We ask people, their families and their frontline supporters what they have learned about the person, and what is working and not working in their lives and supports.

In my experience the times and spaces where people actually share their learning in everyday life are extremely rare. Usually conditions mitigate against this. Where the conditions are not right and people don't feel included on an equal footing, they wont tend to feel inclined to share learning, even if they're asked. Learning tends to get shared better horizontally in circles than vertically in pyramids, between equals, rather than in situations of imbalance of power and knowledges, and such equal situations are themselves all too rare.

If we think someone is much more knowledgeable than us, we tend to clam up, let them do the talking. In general we would be nervous to share our ideas with someone if they are going to think us naïve or that we have missed the point. Nobody likes to feel stupid.

If someone is more powerful than us, is hugely influential in our lives, then our strategy tends to be very similar.  It does not always  seem wise to share something that might contradict somebody with great sway over your destiny.

What we have learned from our experience is precious to us, when we share it, we feel exposed, at risk. Most of us need to feel confident that what we are sharing is going to be heard, valued and appreciated, or we keep it to ourselves.

Because most organisations contain hierarchies and silos, and because of the inequalities in society, person centred practitioners try to work out in our practice ways of temporarily short circuiting these hierarchies, bringing people out of their silos in order to connect them on a more equal footing and to allow learning to be shared between them.  We find and wedge open gaps and spaces in the formal structures of organisations attuned to the needs of bureaucracy and market instead of to people, and while in these interstices, we aim to create 'power with' rather  than 'power over'.
In person centred planning, and in training, we rely almost totally on people we call 'content experts' sharing their learning for these processes to work.  In person centred thinking and planning it's the learning of people closest to the person from their direct experience that we truly value. In the training we lead, it's about unleashing some of the tacit knowledge that lurks in people who have years of experience, deep values, different ways of seeing the world, so that everyone in the room learns from themselves and each other.
I've found in my most successful trainings 80% or more of what people have learned comes from each other, rather than from me. This is also true in the best planning sessions and coproduction exercises. As facilitators and trainers we feel a real buzz after events and processes that achieve this. After such sessions we feel that we have also learned a great deal ourselves, we yearn to achieve this again! This 'buzzy' feeling is a sign that learning has been successfully shared, that for a short space of time the conditions for sharing learning were successfully in place. 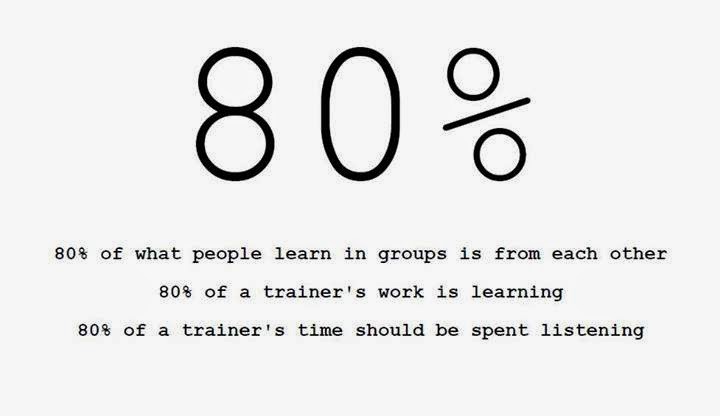 As facilitators and trainers one really key role is therefore to create the conditions where power and other imbalances are addressed so that sharing of learning can happen.
In both planning/thinking and in training we achieve this by a variety of methods – which include
·         Establishing a clear purpose for the session, so that everyone participating understands where to focus  their thinking
·         Involving the  right people: in PCP the people most directly involved in the person's life
·         A hospitable space that makes people feel valued, comfortable, safe.
·         Rituals and routines of demarcation at beginning and end that separate learning space and time from work or leisure time.
·         Ground rules (as few as possible, and each one designed specifically to  help people be included and involved)
·         Equal space and time for each participant, so that everyone gets a chance to contribute. (Delivered through techniques like 'rounds')
·         Mutual respect
·         Using the communication methods most appropriate for the person/participants
·         Listening Mindfully
·         Incisive questions
·         Appreciation
·         Valuing each contribution
·         Being prepared to  act on learning and turn it into concrete change

It's worthwhile spending plenty of thought on what the conditions are that enable people to share their learning. If we're to achieve genuine engagement from citizens in the production of their own lives and services, if we're going to listen to people well, if we want to create organisations that learn and change, then a grasp  of how we create the conditions for people to share learning is fundamental.
Posted by Unknown at 21:35 No comments:

Inclusion is the ship that isn't even built yet... 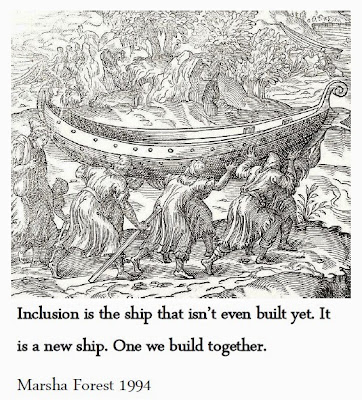 http://www.allfie.org.uk/pages/useful%20info/inclusion.html?style=TextOnly
Posted by Unknown at 20:57 No comments: